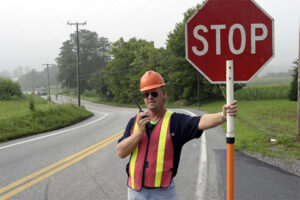 The following traffic control plans have been safely used by Surface Preparation Technologies, LLC and others to construct rumble strips on various U.S. roadways. Although these plans are based on M.U.T.C.D. standards they are only being provided as examples. The use of these plans or any portion thereof must be reviewed and approved for use by local traffic engineers.

Rumble strips are currently being used on shoulders and directly on top of edgelines and centerlines. Since most rumble strip operations move anywhere from 1-3 miles per hour, a moving traffic operation lane closure has proven itself safe for both contractors and the traveling public.

Moving operations are currently being used by most state highway administrations (SHA) on multi-lane roadways because they offer (1) the safest work environment for the highway workers, (2) they are safer and less intrusive to motorists than static lane closures, and (3) they significantly reduce the number of construction days versus lane closures with cones or barrels.

The Safest Plan for Highway Workers

Using a stationary lane closure, such as with cones or barrels, most state highway authorities limit contractors to closing only 2-3 miles of roadway at one time. This requires highway workers to work across live traffic at all times, constantly moving signs and cones just to keep up with the pace of the milling operation. Most of the workers on the job are never behind the protection of the lane closure.

The Safest Plan for Motorists 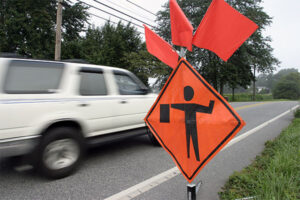 Using a moving operation, the contractor can limit his lane closure to only 300-500 feet of the roadway. The moving variable message sign coupled with the use of the T.M.A. vehicles with arrowboards quickly grasps the attention of travelers and safely moves them around a short work area.

A stationary lane closure will shut down 25 to 100 times more roadway than is necessary. In an attempt to accommodate the speed of rumble strip operations, some highway authorities have tried allowing contractors to close 10 miles or more of the lane with cones, or even set up multiple static lane closures. However, this plan represents an 100X increase in the size of a lane closure over a moving operation. Such unnecessarily large lane closures are both less safe and less convenient for motorists.

Using a moving operation lane closure, contractors can completely move their construction crew off of the roadway in less than 2 minutes in the event of a weather emergency, or any kind of traffic problem. Static lane closures can take more than an hour to break down in the event of an emergency.

Moving operations can also be used on 2-lane/two-way traffic roads that have wide shoulders, good sight distance and lighter traffic volumes. Wide shoulders are necessary so opposing vehicles can move right to pass oncoming traffic that must encroach their travel lane when passing the rumble strip operation.

Moving flagging operations should be used on 2-lane/two-way traffic roads which have narrow shoulders and limited sight distance. The use of preflaggers in addition to primary flaggers is recommended to slow traffic in advance of the stopped or slow situation that traffic will encounter once they reach the primary flaggers.

Click here to view a plan of a moving flagging operation

The previous traffic control plans have been safely used by Surface Preparation Technologies, LLC and others to construct rumble strips on various U.S. roadways. Although these plans are based on M.U.T.C.D. standards they are only being provided as examples. The use of these plans or any portion thereof must be reviewed and approved for use by local traffic engineers.