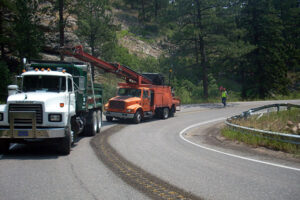 Highway authorities typically place rumble strips along their interstate shoulders first because these roads handle the highest traffic volumes. Less-traveled secondary roads, however, stand to realize an equal and often greater benefit from the use of shoulder and centerline rumble strips.

Secondary roads have narrow shoulders and that means drifting drivers have less time to correct even when traveling at slower speeds. Also, trees, embankments, rocks, ledges and other dangers typically lie much closer to passing traffic along secondary roads, than they do along the interstates.

Head-on crashes pose a serious threat on narrow, rural roadways where a driver can drift into the wrong lane in a moment of inattention.

Centerline rumble strips must deliver a resounding alert the moment the driver begins to drift. The 7 x 16 x 1/2 inch rumble strip used on highway shoulders throughout the United States has prevented countless head-on crashes when placed along the centerline of secondary roads.

SPT’s full-lane rumble strips are effective when installed prior to stop signs, before dangerous curves, before guard shacks, or on off-ramps. They are a great way to command the traveling motorists’ attention. SPT installs two rumblestrips at a time with an attachment on a skid steer. This minimizes traffic congestion and road rage. A typical full lane rumblestrip pattern is a 4″ wide cut, 1/2″ deep, and an 8″ island (or space between cuts). SPT can accommodate just about any pattern set by the owner or DOT.