Rumble Strip Construction: Retrofit Existing Shoulders or Wait Until the Next Resurfacing?

There are three reasons state highway authorities have elected to retrofit existing shoulders with rumble strips rather than wait until the next resurfacing:

We Have Finished Retrofitting Our Shoulders With Rumble Strips. Now What?
Some states that have already retrofitted their existing shoulders with rumble strips nonetheless have continued their policy of not re-installing rumble strips as part of resurfacing projects.

Instead of reinstalling the rumble strips as part of the next resurfacing project, some states let a single statewide project to construct rumble strips along all the highway shoulders recently resurfaced throughout the state. This way, states such as Connecticut have seen their unit costs drop by half while eliminating their quality control problems at the same time.

On larger retrofit projects with 300 or more shoulder miles, states can expect bids of $700/mile ($0.13/cut) or even less. This unit price includes the construction, the clean up of the debris, traffic control — everything.

It is important to remember that typical bid tabs only reveal the subcontractor pricing for cutting the rumble strips. To this you must add incidental costs such as clean up of the debris, traffic control, general contractor mark-up, etc. Depending on clean up specifications, traffic control requirements, and how the work is phased, these incidental costs can add up to more than the construction costs. In this example below, while the bid tabs may show a cost of $650 per mile for rumble strips, the incidental costs that are added to other items in the bid are more expensive than the milling of the rumble strips: 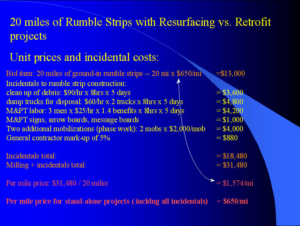 Rolling start dates ensure the most competitive bidding for the state. A relatively small number of rumble strip contractors work on projects throughout the country. States that set a specific start date risk choosing a date when few contractors are available. Not only would this result in high prices, but a state could find itself receiving bids only from inexperienced contractors with untested equipment.